Shares in China fell on Monday after protests against the government’s tough Covid-19 policies weighed on market sentiment and added to uncertainty about the outlook for the world’s second-largest economy.

In Hong Kong, the Hang Seng China Enterprises Index dropped as much as 4.5 percent before pulling back to shed 1.5 percent. The decline on China’s CSI 300 index of Shanghai and Shenzhen-listed shares was as large as 2.8 percent before it was trimmed to about 1.1 percent.

Demonstrations broke out in Beijing, Shanghai and other cities over the weekend against harsh pandemic restrictions. Discontent has risen since a fire in the city of Urumqi killed 10 people on Thursday, and sent shockwaves across China as authorities denied accusations that coronavirus restrictions were hampering rescue efforts and preventing residents from fleeing the blaze.

“Investor confidence has already been battered this year, and it is difficult to understand what the direction of the market will be next,” said Louis Tse, managing director of Hong Kong-based brokerage Rich Securities.

Tse said investors were concerned about a lack of further support for China’s economy as infections hit record highs and underpinned a rally that pushed the Hang Seng China Enterprises Index up more than 17 percent this month.

The use of blank paper as a symbol of protest against censorship caused trouble for some listed Chinese companies. Shanghai-listed shares of Shanghai M&G Stationery, a paper supplier, fell as much as 3.1 percent on Monday. It clarified in an exchange filing that a statement circulating on social media, which claimed that the company has stopped sales of A4 paper “to safeguard national security”, is a forgery. 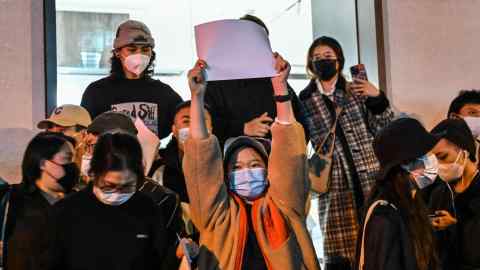 The increasingly confused outlook for China’s economy also weighed on the renminbi. The Chinese currency fell as much as 1.1 percent to RMB 7.24 against the dollar.

The US it. The dollar index, which measures the greenback against its international peers, held steady in early European trading, partly benefiting from the “flare-up in China risks,” said Lee Hardman, a currency analyst at MUFG.

Martin Petch, vice-president at Moody’s Investors Service, said that the protests “have the potential to be credit negative if they are sustained and produce a stronger response from the authorities”.

“Although this is not our base case,” he added, “this would lead to an increased level of uncertainty over the degree of political risk in China, spilling over into damaged confidence and therefore consumption in an already weakened economy.”

The unrest weighed on equities elsewhere in Asia, with Japan’s benchmark Topix down 0.7 percent, while South Korea’s Kospi and Taiwan’s Tyex were both down 1.5 percent.

Europe’s regional Stoxx 600 slid 0.4 percent early on Monday, while London’s FTSE 100 dropped 0.7 percent. The S&P 500 was set to shed 0.5 percent, as suggested by futures pegged to the index, when trading begins on Wall Street.

Oil fell sharply, with Brent crude, the international benchmark, down 2.8 percent to trade at $81.31 a barrel, and US benchmark West Texas Intermediate fell 2.8 percent to $74.12.