Derek Gable came up with his first invention when he was seven years old – a warning system to trick his parents into thinking he was asleep while reading comic books late at night. He wrapped a fishing line around the light switch in his room and ran down the stairs. “When my dad was standing on the second step, it turned off the light in my bedroom, so I knew he was on his way,” he said. “If you’re an inventor, you see problems as opportunities.”

Gable said that as a child he was always fascinated by how things worked, often taking kitchen tools apart, much to his mother’s dismay, and then not knowing how to put them back together.

“I spent most of my life in my bedroom, in trouble,” he said.

His classes are not only focused on business plans, prototypes and market research. A vital component to business success, he said, is the ability to have fun and to feel passionate about your work. 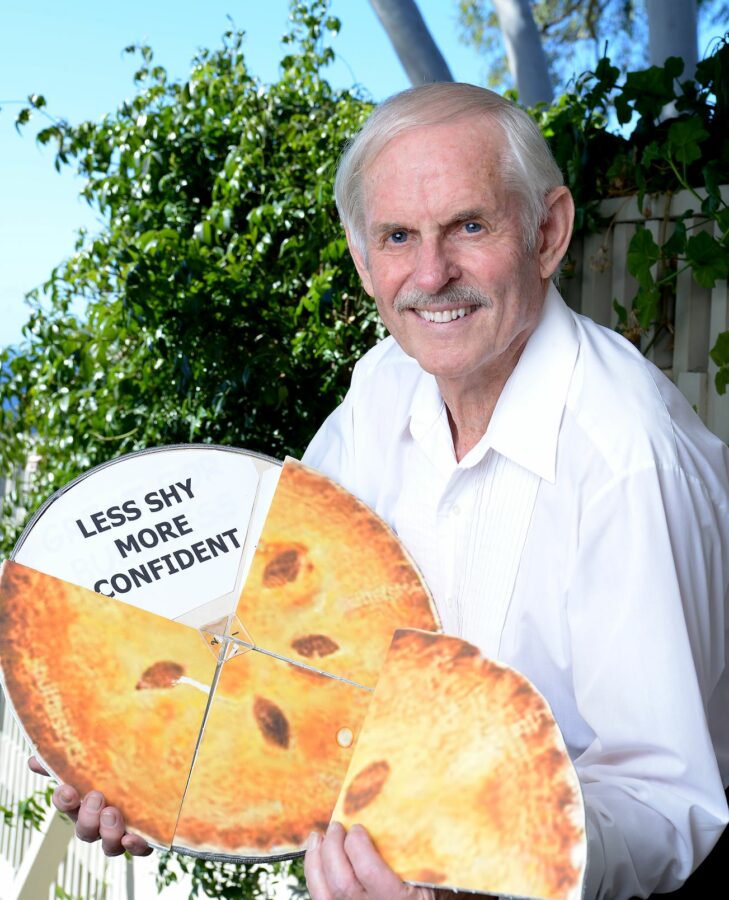 Former Mattel designer Derek Gable is being honored for teaching kids that having fun at work is part of the job.

The longtime Rancho Palos Verdes resident added, “Having fun is not disappearing. Having fun is doing what you love.”

The 80-year-old inventor transforms his students from shy, awkward students into confident entrepreneurs who can perform in front of an audience, using a process he calls PIE, or Positive Interactive Energy.

“When you work with people in a positive interactive way, magic happens,” Gable said. “Success and happiness are based on gratitude, a positive attitude and achievement.”

Gable teaches students basics like smiling because “your face is your door, open and inviting, or closed and rejecting,” putting down electronic devices, and “talking in person to your family and friends.”

Personal and financial success also depends on being grateful for what you have, helping others and “going beyond your social circle.”

Daniella Vincent said she took Gable’s Young Entrepreneurs course when she was a junior at Palos Verdes High School, when she wasn’t sure what she wanted to do with her life.

“The classes were very interactive. He made them fun and entertaining,” she said. “He knows how to take shy, self-conscious and unmotivated high school students and transform their entire psyche.”

During the class, Vincent said, Gable helped her create a 15-page business plan for a jewelry company. Vincent, 21, majored in entrepreneurship at Loyola Marymount University and is on track to become a certified financial planner.

Peninsula High student Aiden Hanover, 18, said Gable helped him patent a sheet music holder for musicians known as the “Flip-It Music Holder.” The invention was born from Vincent’s personal experience performing outdoors in a jazz band, and the “seeing the sheet music blown away by the wind.”

“He inspired me to keep going and said it had a lot of potential.” Hanover said.

Gable earned a mechanical and production engineering degree in his native England. After college, he created parts for Rolls Royce jet engines, designed after projectors, car building robots and machines to make Cadbury candy. “I felt like Willy Wonka because I would take candy home for the neighborhood kids,” he said.

In 1968, an engineer he worked with invited him to come to the United States to work for Mattel. He and his wife Pam, both still in their 20s, packed up and moved to America for “freedom and opportunity.”

“America gives you the gift to be who you want to be, and to write your own story,” Gable said. 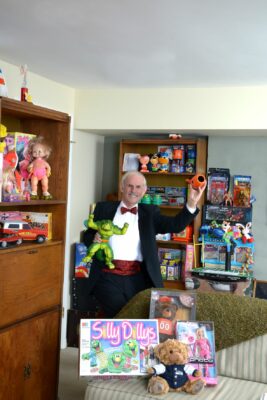 Former Mattel design director Derek Gable with some of his team’s toys. Photo by David Fairchild

He worked at Mattel during his time, in the 70s and 80s, with founders Ruth and Elliot Hendler.

“The company was full of young creative mavericks who were chosen for their sustainable ideas, and willingness to step out of the box and take chances,” said Gable, whose title was director of a Mattel think tank known as Preliminary Design. He was responsible for male action figures, small dolls, games and novelties.

Gamble oversaw a team of 20 creatives who invented 50 toys and accessories for Barbie dolls and Hot Wheels. His group was with the Lord of the Universe action figure Er Man, a brand worth $4 billion. Back then, management knew how to nurture talent, he said.

“To manage creative people, you must allow them to play. You do not structure them. You do not tell them what to do,” he said. “You say, ‘Go and play’ and they judge you on your results.”

The creatives, or “freaks” as Gable calls them, are slowly being pushed out by “the suits — the accountants, lawyers and marketing types,” he said.

When Mattel disbanded the think tank, Gable left to start West Coast Innovations. He and a partner invented the first audio recording lock box system for showing real estate. The security device stores a house key and records realtors’ entries into a property. The company controlled 80 percent of the world market, with sales of $10 million a year.

The company also focused on helping inventors take their concepts to production.

Now, in addition to teaching at the Young Entrepreneurs Academy, he leads a class called “I have this great idea, but I don’t know what to do with it.”

The study did not stop his invention. Gable’s latest invention is the Sonic Finn Football, a toy football that is thrown 145 yards, almost half a football field. Denver Broncos quarterback Russell Wilson serves as pitchman for Sonic Finn.

For his contributions to the Young Entrepreneurs Academy, the Palos Verdes Peninsula Chamber of Commerce is honoring Gable with its Citizen of the Year Award on November 16 at the Trump National Golf Course.

He was invited in 2013 to be a guest speaker at the Young Entrepreneurs Academy, and fell in love with the program because it “teaches kids stuff that makes their lives better and allows them to be who they should be.”
Gable believes that successful people have strong people skills.

“I’m all about boosting confidence in a good way. Being able to lead people, inspire people,” he said, talking about the skills that are not taught in school.

“Derek’s creativity, positivity and commitment to the students in the Chamber Young Entrepreneurs program is unparalleled,” said Chamber President and CEO Eileen Hupp. “He is always dedicated to mentoring and managing our businesses, especially startups and newly opened businesses.”

Students in his classes said Gable practices what he preaches, injecting enthusiasm, positivity and teamwork not only into each three-hour class, but his life.

“He’s a little bit. He laughs a lot and makes a lot of jokes,” Vincent said. “He’s not one to draw within the lines.”

Having fun and being a little non-conformist is what many stressed high school students need, Gable said.

“Success is not about having a billion dollars,” he said. “Success is making good use of your time and doing the things you should do.”